"Politics," writes Robert Louis Stevenson, "is perhaps the only profession for which no preparation is thought necessary." How unfortunate for the commonweal is this conception! According to Webster, politics is the science and art of government. Should not a politician, therefore, in the better sense of the word, be at once a scientist and an artist? He should conceive of scientific government as founded on Principle and motivated by righteous, harmony-producing law; and, as an artist, he should be a skilled, dexterous practitioner of this law. But how much is this high, true sense of politics perverted! When one is said to be "playing politics," he is supposed to be guilty of questionable, selfish practices wherein men, and not measures, are the prime consideration.

In her "Rule for Motives and Acts" in the Church Manual our far-seeing Leader, Mary Baker Eddy, in a few words describes the erroneous sense of politics and gives the remedy therefor. She writes (Art. VIII, Sect. 1): "Neither animosity nor mere personal attachment should impel the motives or acts of the members of The Mother Church." Then she adds, "In Science, divine Love alone governs man." The alert Christian Scientist, therefore, should be found protecting politics, all righteous political activity, from the encroachments of the carnal mind's perverted concept. In her book, "The First Church of Christ, Scientist, and Miscellany" (p. 291), Mrs. Eddy pictures graphically true politics in operation. Commenting on the work of the martyred President McKinley, she writes, "It began by warming the marble of politics into zeal according to wisdom, quenching the volcanoes of partizanship, and uniting the interests of all peoples; and it ended with a universal good overcoming evil."

Send a comment to the editors
NEXT IN THIS ISSUE
Editorial
What If? 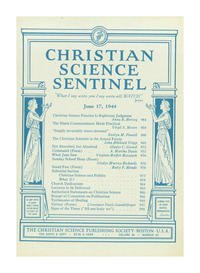