Christ Jesus' ministry, as presented in the New Testament, is replete with evidence of his healing power. Familiarity with these proofs of Jesus' divine power to heal "all manner of sickness and all manner of disease among the people" brings the conviction that the Gospel writers exercised restraint when recording the Master's mighty works. The ability of Jesus to exercise the divine power of Christ-healing is substantiated not only by the miracles recorded, but also by the cases which are indirectly mentioned in the Scriptural accounts. Instances which do not cite specific details of the ailments also attest the Exemplar's achievements in restoring health through the employment of spiritual means alone. Several passages include simply the phrase "and he healed them." That brief statement, however, sustains the fact that healing sickness and sin was an integral part of his God-designed mission.

Mary Baker Eddy, beloved and revered as the Discoverer and Founder of the Christ Science which is setting men free from error, posited her revelation of Truth upon the words and works of the Master. Her exposition of his life and works explains very clearly the method of the Christ-healing. Like the Way-shower, our great Leader affirmed and demonstrated beyond cavil the superiority of this method over material ways of healing. She followed in the way Jesus pointed out and proved that in the spiritually scientific mode of healing, victory inevitably rests on the side of Principle. The growth of Christian Science continues steadily because its spiritual pathology is found to be most effective for healing the sick. It was said of the early followers of Christ Jesus that, because of their healing accomplishments, "believers were the more added to the Lord, multitudes both of men and women." In these latter days similar results attend the practice of Christian Science. 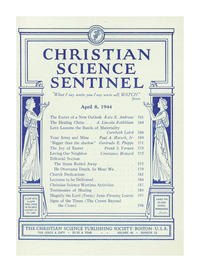