Christian Science was presented to me at a time when I was abroad and feeling very lonely. I had decided to attend a church in the hope of making some friends, and the day previous to doing this a Christian Science Sentinel came in by post. I read it and showed it to my husband, who told me that a traveler friend of his had sent it and had also invited us to attend his church, which turned out to be a Church of Christ, Scientist. We did so and enjoyed the services. Our children were enrolled in the Sunday school, and so have attended it almost from infancy. This has brought us many blessings, which I am eager to share with others.

My boy, when quite small, had a hernia. I was very fearful about this, but did not tell anyone of it. After a few years had elapsed, it had grown very much larger. One night after retiring I could not get to sleep because of thinking about it. I sat up for a time reading "Science and Health with Key to the Scriptures" by Mary Baker Eddy, but did not get rid of the fear. I prayed very earnestly that I might be shown what to do, and almost immediately it came to me that if no one knew of it but myself, and God could not know of it, I was the only one who believed him to have it. About three months passed, during which I bathed the child regularly myself, but did not remember there had been such a condition until one day I noticed that it had completely disappeared. 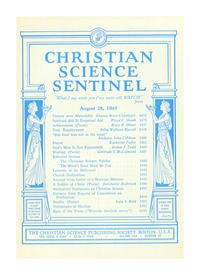