Baytown, Texas (First Church).—The new building of First Church of Christ, Scientist, Baytown, built at a cost of approximately thirteen thousand dollars, was dedicated at two services held on Sunday, December 28, 1941. Construction on the building was begun in June and completed in December, when it became free of debt. A Christian Science church cannot be dedicated until it is debt-free.

The dedicatory services, one in the morning and the other in the afternoon, were conducted by the First Reader. The following dedicatory sketch was read: 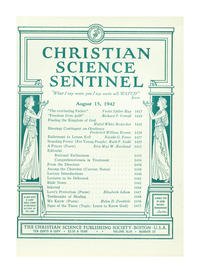