It is an interesting fact that the Chinese alphabet is in a degree made up of pictures. Human life may be said to be made up of a series of pictures which are unintelligible except as they are interpreted. That which gives meaning to the landscape, trees, and flowers is the intelligence with which they are perceived; and in proportion as thought is spiritually cultivated through the understanding of Christian Science do they take on higher meanings. In "Science and Health with Key to the Scriptures" by Mary Baker Eddy we read (p. 502), "The crude forms of human thought take on higher symbols and significations, when scientifically Christian views of the universe appear, illuminating time with the glory of eternity." Since language is merely a series of pictures of thought, is not the universe itself a book written by Divinity, a book which has been misinterpreted and misconstrued by ignorance? And only as enlightenment has dawned on human thought has this great book become intelligible. The riddle of the universe, as it has been called, has puzzled men in all ages. Students of Christian Science have found the solution to this riddle in the Christian Science textbook, and this has been verified to them through the healings that have resulted by putting its truths into practice. Thus they are convinced that Mrs. Eddy has given them the correct translation of the language of Spirit as recorded in the Bible.

"In the beginning was the Word, and the Word was with God, and the Word was God," writes John. "All things were made by him." Everything, therefore, is perfect in origin and essence and has simply been misinterpreted and misconstrued by ignorance—not understood, or misunderstood. Our Leader writes on page 74 of "Miscellaneous Writings," "His [Christ Jesus'] earthly mission was to translate substance into its original meaning, Mind." Our work then as students of Christian Science is spiritual translation. We are required to translate division and duality back into oneness, discord into harmony, perishable matter into the imperishable substance of Spirit, lack and bondage into plenty and liberty. When thoughts of decay and death have been eliminated from human consciousness, the symbols representing error will disappear. 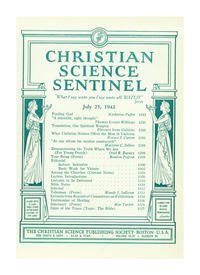