Four years ago I reached "man's extremity," having...

Four years ago I reached "man's extremity," having sought help for my twelve-year-old daughter from the doctors without benefit. I was told by them that she had a ruptured appendix with peritonitis, fecal fistula, two pus drains, and heart trouble. She had high fevers continually. The tendons in the back of her legs were drawn, so that she was always in a sitting position. She stayed in the hospital for four months the first time, and had just been brought back home for the third time when Christian Science was offered to me, and we decided to call a practitioner who lived some distance away. It was then that the power of Truth over error was demonstrated.

After a day and night of vomiting the child fell asleep while I was talking over long-distance telephone to the practitioner. She slept all day. That night we were called on to take a stand for God. How many times have we read, "One with God is a majority"! She seemed to be suffering intense pain, as she had so often done in the past ten months. All the family insisted that I give her medicine to ease her. But I refused, declaring and knowing the omnipotence of God. She requested me to read to her from the textbook, "Science and Health with Key to the Scriptures" by Mary Baker Eddy. I read for about fifteen minutes, and she fell asleep. She awakened hungry, and I fed her without fear and with none of the bad results she had experienced before. In three days she could sit up in a chair.

Send a comment to the editors
NEXT IN THIS ISSUE
Testimony of Healing
Christian Science came into my experience, in direct,... 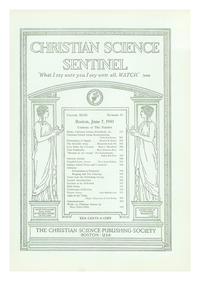