Claiming the Victory over Evil

The Christian Scientist's prayer is always essentially, "Thy will be done." It is never a prayer of resignation to anything unlike good, nor is there any vagueness about its meaning or method. It is acknowledgment of the allness of God, good, and of the nothingness of anything else; and the Scientist knows that in proportion as this acknowledgment is clear and complete, he has evidence of the divine allness.

No matter what evil appearance may confront him therefore—whether disease or sin, ignorance or hate, want or war—the student of Christian Science learns, upon the most practical grounds, not to be dismayed. He learns that evil in all its forms is sheer mesmerism, nothing appearing as something. He understands that it is not more substantial nor potent at one time than another, and that it is never actually potent or substantial at all. Moreover, the student is enabled to see exactly what to do about evil, as it seems to be. By the very revelation of its nature as illusion, he sees that his need is to awaken, rouse himself from the dream, rise into that realization of true being which shows the illusion to be false and dispels all its evidences. 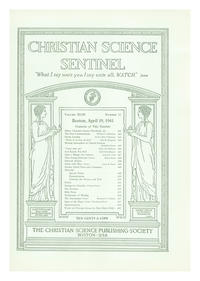