About nine years ago a friend sent us a copy of the...

Lorimer S. Wilmot with contributions from Kathleen May Wilmot

About nine years ago a friend sent us a copy of the Christian Science Sentinel. I suggested to my wife that we put it in the fire without reading it, for at that time I believed it to be some new religion that we should avoid.

I am glad now that my wife would not do so. Instead, she stated that, as far as she could see, one could get only good from it, and the Sentinel was read, then studied carefully. I did not credit many of its statements, since it was the opposite of what I had been taught in many things, but when I got to the testimonies of healing, I knew there was some truth in Christian Science. I continued to study Science, and it was not long before I knew it was the truth which makes free.

Send a comment to the editors
NEXT IN THIS ISSUE
Testimony of Healing
Again it has been proved to me that when one relies on... 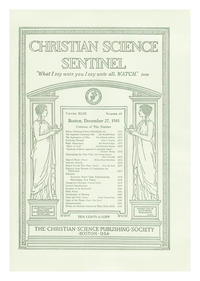