In these days when nation is rising against nation and we are hearing much "of wars and rumours of wars," we are prone to think of warfare only in its cruel, destructive phases. Many people regard warfare primarily as a national or an international problem in which the individuals, especially those enlisted in armies, navies, and so on, have opportunity to render faithful service to the cause they espouse, and that often at a great cost to their individual welfare.

But there is a warfare that is humane and constructive, a warfare in which every individual of peaceful countries, as well as of warring nations, can make a major contribution of immense benefit to himself as well as to his nation and to the world. It is a warfare that is destined to end all destructive warfare—civil, social, political, and industrial, as well as international conflicts of all kinds. That all-important warfare in which we can all be happily engaged is the warfare with the false sense of self, the uncovering and conquering of every unloving and unlovely trait that mars our complete and perfect expression of the one perfect creator, in whose image and likeness we, in our true being, are made. 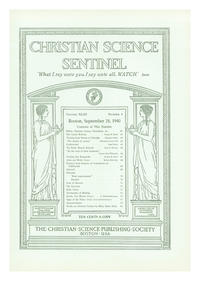