A correspondent signing himself "Watchman," writing...

A correspondent signing himself "Watchman," writing in a recent issue, refers to Christian Science. Is "Watchman" awake when he sounds a note of warning against this newold Science of Christianity? Has he studied the subject, or seen anything of the signs with which this teaching is accompanied?

The critics of Christian Science are usually those who have only looked into the subject superficially, or else approached it with prejudice. To an impartial student the logic of Christian Science is unassailable and its proof arresting. The twentieth century makes strong demands on religion. The dogmas and rituals which satisfied our forefathers are no longer acceptable to thinking men and women. Reason is rapidly superseding resignation.

Send a comment to the editors
NEXT IN THIS ISSUE
Article
Christian Science is Science, and is applicable to humanity.... 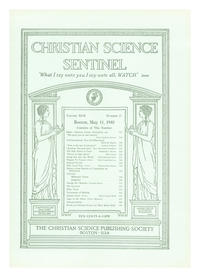