Young people in schools and colleges often have much to to with competitive sports, and to them, if they are Christian Scientists, there comes the need to understand what success in athletic contests really is. As a rule, too much emphasis is placed upon the necessity for defeating opponents. This is considered to be the mark of success. It would seem to many that there is no victory in athletics which does not bring failure to another contestant. The result is that athletes often accept the suggestion that their main business in sports is to strive to defeat rival athletes.

No young man who has learned something of Christian Science desires to be the agent of defeat or failure. His Christian Science upbringing and Sunday school training have taught him that his own good is directly involved in the good of his fellow men, as Mary Baker Eddy has so clearly stated on page 518 of "Science and Health with Key to the Scriptures" in the words, "Blessed is that man who seeth his brother's need and supplieth it, seeking his own in another's good." Of course, he wishes to succeed. How, then, can he rightfully, in the light of Christian Science, hope for success? He knows he could not hope to gain health through Christian Science treatment at the expense of one of his fellow citizens. How, then, the young student may ask— and many have asked—shall a person regard athletic competition from the standpoint of Christian Science?

Send a comment to the editors
NEXT IN THIS ISSUE
Article
In his "Notebook" in your last issue, "Wayfarer," reporting... 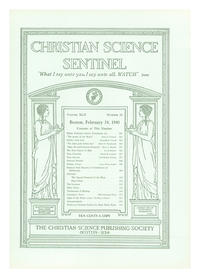