Generally speaking, editors and publishers are unwilling to allow attacks upon Christian Science or its Discoverer and Founder, Mary Baker Eddy, to appear in their publications. Only two articles of this character appeared during the past year in newspapers, and the editors promptly printed letters of correction.

Of the many interesting reports received of healings from our devotional radio programs, we have selected the following: 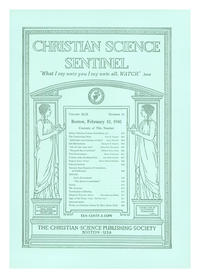