I have had so much help from testimonies given in the...

I have had so much help from testimonies given in the Christian Science periodicals that I feel I cannot delay any longer in sending mine.

I had undergone a major operation, and after coming out of hospital was very weak and ill. I had no money and was not fit to seek an engagement, my work being that of an actress. I had no home of my own, but a club where I generally stayed kindly gave me a room. While I was walking along the street one day, feeling very unhappy and afraid of the future, I saw a poster advertising a Christian Science lecture, which was to be given on the following day. I decided to go, for it was to be given at a hall close by.

Send a comment to the editors
NEXT IN THIS ISSUE
Testimony of Healing
I am grateful for the many blessings which have come to... 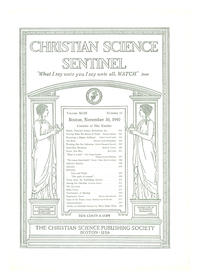