The writer was an interested spectator one day at a track meet held on the grounds of a large middle-western university. As each event took place, she noted with pleasure the control which the participants were exercising over their bodies. The pole-vaulting event seemed particularly impressive, and the writer noticed, as each athlete ran swiftly and lightly, pole in hand, to the proper place at which to begin the vault, that there was never the slightest hesitancy at attempting it, no matter how high the bar had been placed.

What a lesson for the student of Christian Science, she thought, as she likened the vaulter's attempt to clear the bar to the mental attitude of the Christian Scientist in endeavoring to solve a problem—whether a physical, moral, social, or financial one. The athlete, if he had hesitated an instant before leaping, or worse still, had become afraid at that point to attempt it at all, would have made a complete failure. Similarly, fear, indecision, or hesitancy would claim to prevent us, as Christian Scientists, from solving our problems. 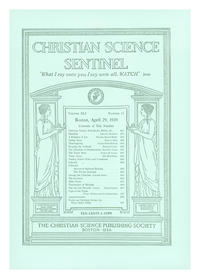