"The speed, beauty, and achievements of goodness"

Partly because of modern traffic, the word "speed" sometimes has an undesirable connotation of headstrong recklessness. However, dictionary definitions of this word include "prosperity," and the Anglo-Saxon root, "sped," means "success," as well as "swiftness." Thus, in its affirmative sense, speed leads to accomplishment, hastened by elimination of the nonessential.

Mary Baker Eddy, in her message on the occasion of the dedication of the Extension of The Mother Church, refers to "the beginning of this edifice," and says (The First Church of Christ, Scientist, and Miscellany, p. 6), "Its crowning ultimate rises to a mental monument, a superstructure high above the work of men's hands, even the outcome of their hearts, giving to the material a spiritual significance—the speed, beauty, and achievements of goodness." 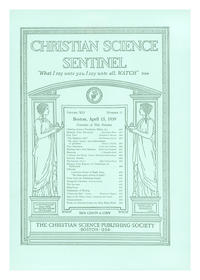