"Seek the Lord, and his strength: seek his face evermore" (Ps. 105:4)—In the original, this verse has two different Hebrew verbs, but since they are virtually synonymous, the rendering "seek" for both is permissible. Both are practically equivalent to "worship," when used, as here, with reference to Deity. Then the Hebrew term translated "face" can also mean "person or presence" (cf. Brown, Driver, and Briggs: Hebrew Lexicon, p. 816). Thus Moffatt has: "Worship the Eternal and his might, worship in his presence evermore;" though Smith prefers: "Inquire of the Lord and his might! Seek his face continually !"

"According to thy name, O God, so is thy praise" (Ps. 48:10)—It is interesting to note that the Hebrew word "shem," generally translated "name" as in this passage, is quite often used in the sense of "character," particularly the "character of God" (see Brown, etc., op. cit., p. 1028b).

Send a comment to the editors
NEXT IN THIS ISSUE
Testimony of Healing
It would be impossible for me to express in words my... 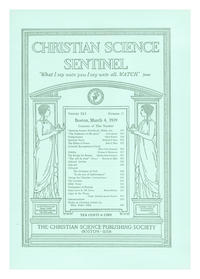