One who is now a student of Christian Science, read when a child a story of a woodchuck which had been caught in a trap attached to a small tree. After its first wild efforts to free itself, it gnawed through the sapling and, dragging trap and chain, fled home. Its mate tried to release it, but failed. Ignorant of the mechanism of the trap, they plotted together to get rid of it. Sometimes they kept very still, hoping it would go away by itself. Sometimes they hid it, pretending it was not there. Finally, accepting its presence, they started upstream. It was a great annoyance. It delayed their progress, because it kept catching in the rushes. The weight of the trap tired the animal, and often its mate carried it in her mouth to ease the strain. Then, suddenly, freedom came. The catch slipped under a huge stone and the forward pull of the woodchuck released the spring. instantly it was free!

One day, while hearing others discuss their plans for vacation, this student awoke to see that she, too, had stepped into a trap—not a steel one, to be sure, but one of mortal mind's making. For three long years she had accepted a statement made by her employers that, due to business considerations, all vacations were suspended. Remembering the story of the woodchuck, she set about trying to release herself. First of all, it was necessary to place the error which was holding her in bondage in its proper category—the belief in partiality—that good could be given to some and denied to others. 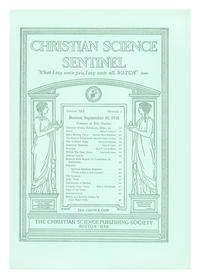