Topic: Stability is of God

[A Correspondent, in the Times, London, England]

Broad-mindedness is a quality much and rightly valued in these days. Indeed intolerance has never been a weakness of our nation, nor in general of any civilized race for any length of time. Even when political or religious passions run high, and controversy rages, the protagonists are the few and their followers make up but a small part of the community. The great majority of men and women cry for a plague on both parties, some being ignorant and others indifferent to the issues which convulse the minds of their contemporaries. But between the bigoted and the careless there is always a fairly large number of quiet, level-headed persons who take no part in the conflict; who are thoughtfully tolerant and go on doing the ordinary good and kind things amid the upheaval around them. Their names may not appear in history, and they are often held in contempt by the champions of different causes; but their patient wisdom provides that ground of common sense on which agreement is at last reached.... 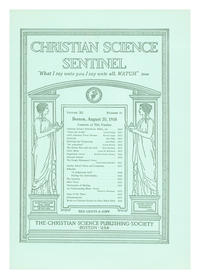