Considerable local publicity has recently been given to a...

Considerable local publicity has recently been given to a pamphlet by a clergyman, which purports to explain Christian Science. As this pamphlet contains several misleading statements, I am asking for the hospitality of your columns to correct some of these.

After admitting that Christian Science has given many people a new and healthier outlook on life, the writer goes on to say that it has no message for the poor and afflicted! The answer to this can best be furnished by the thousands who have been healed of sickness, sorrow, and lack by its means. The fact that the people who attend Christian Science churches generally appear well and happy is a splendid testimonial to its efficacy; many of them were not always so.

Send a comment to the editors
NEXT IN THIS ISSUE
Article
In an issue of the News Times there appears a reprint... 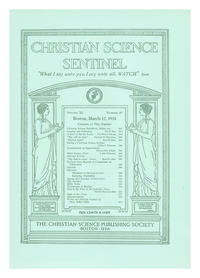