At a time when everything in this world seemed dark and...

At a time when everything in this world seemed dark and dreary and life not worth living, I turned to God. He heard my prayer and led me to Christian Science.

For some time I had not been well, and finally the physician said that a surgical operation would be necessary. I did not recover my health as he had promised, but was much worse after the first operation, and in eight weeks I had to submit to another one. The second operation left me in such poor health that I became despondent, thinking I should be an invalid for the rest of my life. 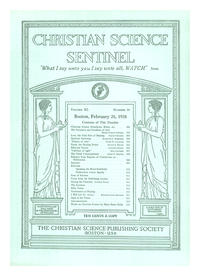