In your esteemed newspaper for April 27, 1937, there appeared an article reviewing a lecture, in which the lecturer attacks different items which he places under the heading of quackery; but his including of Christian Science in this category and talking of its "medical" method, evinces an erroneous conception of this teaching and its way of working. Christian Science does not use any "medical" method, but heals entirely through spiritual understanding, based on the teachings of the Bible, in which the power of God is the only factor reckoned with, healing and blessing, making whole and holy simultaneously.

The impression the lecturer would convey, namely, that healer and patient together concentrate upon the error, is not at all the case, but in direct opposition to the real facts. On the contrary, thought is centered on the all-power of God, good, and this manifests itself in such a way as to drive out error in whatever form it may appear. Indeed, the fact that the body is governed by our thinking, is now more or less generally acknowledged by physicians, who prescribe medicines in far less degree than heretofore, and instead take into consideration the mental disturbances back of the disease.

Send a comment to the editors
NEXT IN THIS ISSUE
Article
In your issue of today you give extracts from a pamphlet... 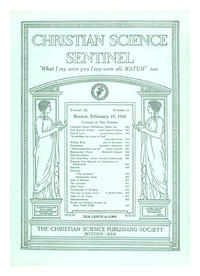