Some of the definitions of the word "success" given by Webster refer primarily to material prosperity or human achievement. They pertain to a relative sense of things rather than to the absolute, spiritual facts of being. Success, from the ordinary point of view, is something which has to be attained, perhaps through long years of effort, not something which is inherently characteristic of man.

On page 462 of "Science and Health with Key to the Scriptures" Mary Baker Eddy, the Discoverer and Founder of Christian Science, lifts the word "success" somewhat above its usual meaning. She says, "Some individuals assimilate truth more readily than others, but any student, who adheres to the divine rules of Christian Science and imbibes the spirit of Christ, can demonstrate Christian Science, cast out error, heal the sick, and add continually to his store of spiritual understanding, potency, enlightenment, and success." Grouping the word "success," as she does in this passage, with spiritual understanding, potency, and enlightenment, which are, in their true sense, divine qualities, it is evident that Mrs. Eddy understood success to be something more than it is usually believed to be. 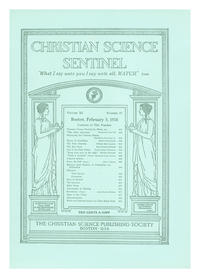