The Giving of Testimony

"Testimony in regard to the healing of the sick is highly important. More than a mere rehearsal of blessings, it scales the pinnacle of praise and illustrates the demonstration of Christ, 'who healeth all thy diseases' (Psalm 103:3)." So wrote Mrs. Eddy in Article VIII, Section 24, of the Church Manual of The First Church of Christ, Scientist. And she adds that "this By-Law applies to testimonials which appear in the periodicals and to those which are given at the Wednesday evening meeting."

This By-Law deserves frequent consideration by members of The Mother Church and members of branch churches. Hardly could it be prayerfully pondered without consequences of much value to the success of the Wednessday evening meeting. It does not impose a duty; rather does it imply a privilege—the privilege of offering specific evidence of the healing efficacy of Christian Science. The giving of testimony is one of the practical means whereby to invite the stranger to investigate Christian Science. The very act testifies to the interest members themselves take in the sustained success of the Wednesday evening meeting. 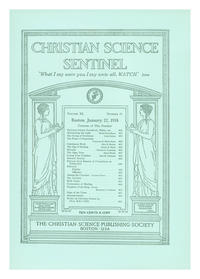