Like the Psalmist, who declared, "I was glad when they said unto me, Let us go into the house of the Lord," Christian Scientists are joyous and faithful churchgoers because they have come to love and revere the Word of God. Who of those attending the Christian Science services has not been benefited, inspired, healed, and spiritually educated by these services? The Word of God is the most powerful preacher there is, and the Christian Science service fully avails itself of this powerful influence for good, healing and regeneration being the acme of effectual preaching.

Jesus was a successful preacher because he healed when he preached. The Gospel of Matthew records that he "went about all Galilee, teaching in their synagogues, and preaching the gospel of the kingdom, and healing all manner of sickness and all manner of disease among the people." Eager ears drank in the divine message which canceled discouragement by bringing hope, blotted out sin by purifying the heart, removed fear by the understanding of Love, freed the sorrow-bound, and cured the cripple. Christ Jesus could preach the divine Word, with its inseparable healing influence, because of his clear recognition that he and the Father were one. And our Leader, Mrs. Eddy, had such a deep understanding of God, with the spiritual ability to impart it, that when she preached many listeners were healed. Some of the healings resulting from her sermons are recorded on pages 15 and 16 of her book "Retrospection and Introspection." 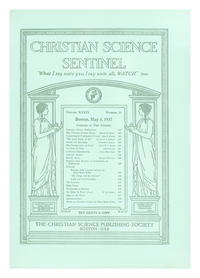