Are We Spiritually Ascending?

A STUDENT of Christian Science was one day watching a balloon which was being made ready for an ascent. Fastened securely with strong ropes and heavily weighted with sandbags, the balloon was earthbound. As soon as it had been properly equipped for the flight, the pilot directed that the ropes be loosed. The balloon immediately started to ascend, rising higher and higher as the weights were discarded, ultimately disappearing from view above the clouds.

The similitude of the tethered balloon and the bondage of mortals to discords and limitations, pointed a significant and helpful lesson. For some time the student had been seeking freedom from a physical discord without apparent success. Indeed, the specific evil belief had become so real to her and so mesmeric in suggestion that oftentimes it seemed difficult to turn her gaze from the physical aspect. Now, however, as she pondered the incident of the balloon loosed from its moorings, she was roused to the clearer recognition that dominion over matter or material sense could be achieved in her own experience only as materialistic theories and beliefs were abandoned and her thinking was spiritualized. She perceived, too, that healing had been delayed because of fear of the physical condition. 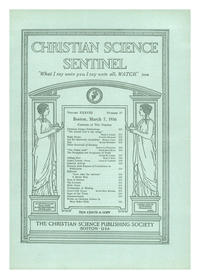