When Mary Baker Eddy, the Discoverer and Founder of Christian Science, replied to the question, "What are your politics?" and said, "I have none, in reality, other than to help support a righteous government; to love God supremely, and my neighbor as myself" (The First Church of Christ, Scientist, and Miscellany, p. 276), she at once divorced government from partisan politics. Furthermore, a careful study and appreciation of her demonstration of government in organizing The Mother Church convinces one that she regarded a proper form of government as essential to the permanency of the Christian Science movement.

The basic laws of righteous government are inherent in the Ten Commandments and grounded firmly in divine Principle, God. This being the spiritual fact of government, we know that partisan politics should not be the ruling factor in determining civic or national forms of government, nor should political intrigue or maneuvers decide the choice of an electorate. The false beliefs of coercion, mental manipulation, or graft operate only in the quality of thought which believes in them or chooses to use them. These false beliefs are postulated upon the supposition that one can be influenced or controlled in one's decisions by other minds, and this supposition tends to darken one's spiritual perception of the one Mind, under whose perfect law and government the real spiritual man must ever move and have his being. 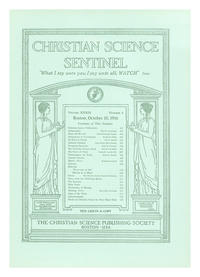