The Bible is a compilation of writings extending over a...

The Bible is a compilation of writings extending over a period of some four thousand years, and since the last book in it was written, practically another two thousand years have passed. It is quite obvious that these books contain in an ever-ascending scale a record of the revelation of God to the human consciousness, which becomes clearer as time glides on. Hence the primitive concept of God, as revealed in some of the older books of the Old Testament, is very different from the concept of Him as revealed by Christ Jesus, or by the beloved disciple who realized and stated that God is Love.

Later it was revealed to Mary Baker Eddy that Love is the divine Principle of all that really exists. When humanity gains this concept of God as unchanging Love, the same yesterday, today, and forever, and understands the fact that man is God's image and likeness, all national and individual problems will be solved in the way Christ Jesus intended them to be solved. Then we shall see the fulfillment of what our Master called the two great commandments, to love God with all the heart, with all the soul, and with all the strength, and with all the mind; and one's neighbor as oneself.

District Manager for Committees on Publication for Great Britain and Ireland,

Send a comment to the editors
NEXT IN THIS ISSUE
Article
In a recent issue of the Sun there appeared an editorial... 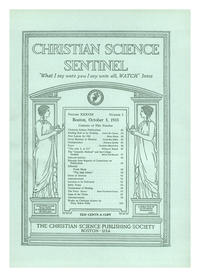