Twenty years ago I attended my first Wednesday evening...

Twenty years ago I attended my first Wednesday evening testimony meeting. At that meeting I discovered that Christian Scientists believe absoultely in the Bible and the teachings of Christ Jesus, and I wanted to learn more about them. I have never ceased to be grateful to that little group of Scientists who helped me on my way. Immediate benefit was experienced in the healing of a bad cough which had kept me ill for over six years. This disappeared after I had read the textbook for a few hours during two successive nights. The next trouble to disappear was severe headaches. Since the rule as stated in the textbook had solved one problem, I was confident that all difficulties would yield to its correct application, and accordingly corns were healed very quickly. Then followed the healing of two teeth which my dentist upon examination had said needed filling, but when I went to keep the appointment a week later he found that no work was necessary. This demonstration was made through studying the Christian Science periodicals during that week to learn all I could about the Love that casts out fear.

Through the reading of the textbook only, I was healed in one night of smallpox. Influenza and blood poisoning in two toes yielded to treatment from practitioners. I am grateful for numerous proofs of protection in danger, especially during the extreme earthquake in Long Beach, California. Words are inadequate to render my thanks to Mary Baker Eddy for the understanding her interpretation of Jesus' teachings gave me, not only before my little son was born, but ever since, in turning us to our Father-Mother, God. If I had had no other demonstration than that, I should have cause for eternal gratitude to Christian Science.

Send a comment to the editors
NEXT IN THIS ISSUE
Testimony of Healing
As I look back on a healing I had recently I am very... 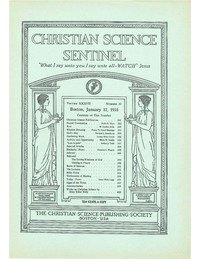