In reply to the article in the November number of Die Auslese...

In reply to the article in the November number of Die Auslese on the Founder of Christian Science, I should like to say that Mary Baker Eddy did not found a sect. Her practice and her whole teaching are based entirely on Christ, whom, in accordance with the Scriptures, she calls the Rock on which the church is founded. Christian Science, therefore, is no escape from actuality; rather is it the recovery of the real and eternal, of the Christianity established by Christ Jesus as a healing religion provable and available in daily life. Mrs. Eddy called herself, therefore, the Discoverer of the primal and eternal truth about God and His Christ; and the Christian Science that she restored is thus synonymous with Christianity. It is not an American, English, or German sect or religion, but it is a purely Christian religion, in which no nation has exclusive right, and which belongs to everyone who recognizes God as the Father of all, and man as created by God.

Mrs. Eddy named her discovery Christian Science because it is founded on the unchanging and eternal law of God, that law of which Christ Jesus said, "I am not come to destroy, but to fulfil."

Send a comment to the editors
NEXT IN THIS ISSUE
Article
A bishop in his address at the Bristol Cathedral is... 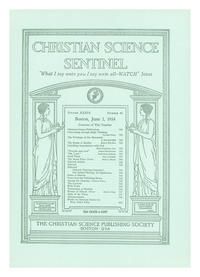