The mortal belief in self-will is usually interwoven with pride of accomplishment, ambition, rivalry, tension, reaction. Actually a bane, self-will poses as an asset. It mostly thrives on opposition and, seeing an obstacle, ruthlessly braces itself to overthrow it; then may look back with pride on wreckage in the rear. The Apostle Peter describes what he calls "the unjust" as "chiefly them that walk after the flesh in the lust of uncleanness, and despise government. Presumptuous are they, self-willed."

The remedy for self-will is not to become volitionless, but to understand and obey the will of God, divine Principle, and this entails acknowledging only one creator, Spirit, and one wholly spiritual creation. No one could succeed in breaking the habit of self-will while continuing to accept matter as the basis of life and intelligence. To combat self-will, then, as merely one of the undesirable traits of human character would be to regard it too superficially. Referring to Paul's statement concerning taking pleasure in infirmities "for Christ's sake," Mrs. Eddy writes (Miscellaneous Writings, p. 201), "The Science of Paul's declaration resolves the element misnamed matter into its original sin, or human will; that will which would oppose bringing the qualities of Spirit into subjection to Spirit." The way of liberation from self-will lies in the recognition of God, Spirit, as the only creator, and Life, Truth, and Love as the only substance. Man in God's likeness is not born "of the will of the flesh, nor of the will of man, but of God." His birthright is spiritual purity, righteousness, and peace. 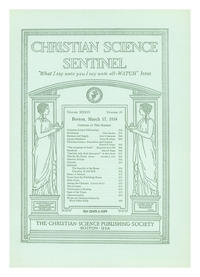