Christian Science was presented to me by a relative, but...

Christian Science was presented to me by a relative, but I shunned it because I thought I wanted nothing to do with a religion founded by a woman. At that time I was a medical nurse, having been graduated from a fine nursing school, connected with one of the universities in the United States.

Some years later, while hastening to the bedside of my mother, the words "Christian Science" came to my thought. I had heard of Christian Science, and now my one desire was to get some of its literature to read, as I was convinced that it would heal my mother. I did not know of a textbook or practitioners.

Send a comment to the editors
NEXT IN THIS ISSUE
Testimony of Healing
I am always glad to express my gratitude for Christian Science... 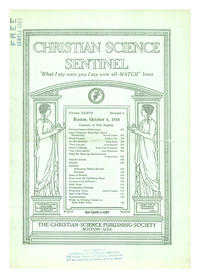