I cannot express in words how grateful I am that Christian Science...

I cannot express in words how grateful I am that Christian Science has come into my life. I can relate only a few of the wonderful blessings that have come to me and mine. A glimpse of the truth that God is infinite Love enabled me to rise from what was believed to be my deathbed.

About three years ago a nervous breakdown compelled me to give up my work and seek medical aid. The trouble became worse and took on many alarming symptoms, accompanied by an intense, inexplicable fear. The aid of a chiropractor was sought, to whose office I was almost carried. I was won by his earnest kindness, and adjustmenst, as they were called, were begun; for his sincere desire to help I am indeed grateful. For a while it was believed that I was benefited, but in a very few weeks a complete collapse occurred, and I was unable to leave my bed. The mental suffering was terrible. For seventeen weeks the struggle went on; chiropractors, medical doctors, light treatments, massages, and dieting were tried without success. Stomach trouble and severe headaches that lasted for days caused much suffering and left me in a very weak condition. I prayed earnestly to God to show me a way out, as I then believed that it was God who withheld my healing and caused me to be left at the mercy of disease. Also much concern was felt for my wife and small son, for by this time we were in a deplorable financial state: every likely source of help had been appealed to and drained; all our possessions were mortgaged and there was danger of losing them. My wife was compelled to seek aid from the city so that we might have necessary food and shelter. It was proved in my case that "man's extremity is God's opportunity."

Send a comment to the editors
NEXT IN THIS ISSUE
Testimony of Healing
"Call upon me in the day of trouble: I will deliver thee... 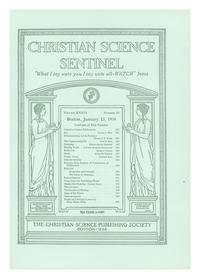