When one is led to Christian Science the darkness of...

When one is led to Christian Science the darkness of mortal existence is illumined by the irradiance of the Christ, and this is a wonderful, redeeming experience. In deep appreciation of this fact I wish to express my gratitude for the unspeakably precious gift, the Christ Science, which has led me out of a dark and shadowy sense of existence, out of deepest despair, to the recognition of man's spiritual origin and his true relationship to God, our Father-Mother.

From earliest childhood the belief of heredity had condemned me to so-called incurable suffering, and with the prospect of paralysis I led a cheerless existence. When I was grown, I wanted to use the time that—according to the verdict of the doctors—was given me, in serving others who had to suffer. I studied nursing, though of course I was unable to meet, as I should have wished, the heavy demands contingent upon this profession, especially during the war. But I wanted to give love as long as I could; and this desire ruled the body. I had ever been seeking God, but the Bible remained incomprehensible and full of contradictions to me. So I looked for peace in different philosophical systems, but they were cold, empty, and unsatisfying. In my despair, for from time to time I suffered greatly from physical pain, I took narcotics; but this only aggravated my trouble and almost enslaved me.

Send a comment to the editors
NEXT IN THIS ISSUE
Testimony of Healing
Some twenty-two years ago, even before I was old enough... 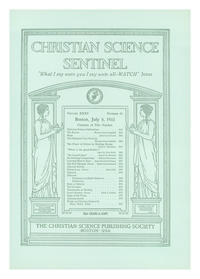