Mrs. Eddy, the Discoverer and Founder of Christian Science,...

Mrs. Eddy, the Discoverer and Founder of Christian Science, says in the textbook, "Science and Health with Key to the Scriptures" (p. 16), "Only as we rise above all material sensuousness and sin, can we reach the heaven-born aspiration and spiritual consciousness, which is indicated in the Lord's Prayer and which instantaneously heals the sick." I have had the proofs and joys of many instantaneous healings in Christian Science, having been healed of influenza, ptomaine poisoning, colds, fatigue, a sprained ankle, a dislocated shoulder bone, and many other erroneous conditions. I have also been healed of despondency and sullenness.

I might enumerate many instances of protection and healing in Christian Science, but one experience has been a source of much gratitude to me. I was advised by my employers that the office force would be reduced, and that my services had to be dispensed with. Upon seeking some solution of this problem, I read the parable of the prodigal son as found in the fifteenth chapter of Luke. The words, "How many hired servants of my father's," suggested those in line of active service, and one in God's service could not want or lack anything needful or good, since man's position is one of reflection. I remained with this firm several months longer than contemplated, and when the change came it was one of demonstration and progress. I am appreciative of the consecrated and loving help of a practitioner during this adjustment. We read in Science and Health (p. 102), "Mankind must learn that evil is not power;" and further (p. 468), "All is infinite Mind and its infinite manifestation, for God is All-in-all."

Send a comment to the editors
NEXT IN THIS ISSUE
Testimony of Healing
My heart is overflowing with gratitude for the glorious... 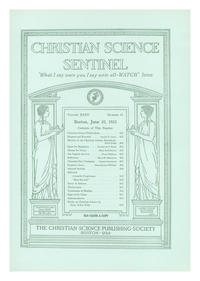