During the two years which followed my first contact...

During the two years which followed my first contact with Christian Science I was bitterly antagonistic to it, as I was sincerely convinced that it could produce only the worst possible effects on those who believed in it. At that time I was in a very depressed state of thought; physically I suffered from rheumatism and periodical attacks of lumbago; morally I was fast losing all belief in good. The interest I took in all so-called intellectual questions did not bring me any peace or satisfaction. Owing to the fact that my father was a clergyman, I possessed a fair knowledge of the Bible, but this did not bring me any relief as the book was meaningless to me.

One day when circumstances presented life to me darker than ever before, I experienced a deep longing for something better, higher, more substantial than material happiness, and I resolved to look into Christian Science instead of attacking it. My first inquiries left me unsatisfied. Later a friend suggested that I should hear a lecture. I went to one, and I shall never forget the peace which I experienced that evening, and the joy at hearing it stated that God was that good for which I was searching. The logical deductions I made from all I heard convinced me that at last I had found something substantial.

Send a comment to the editors
NEXT IN THIS ISSUE
Testimony of Healing
For the many blessings and healings I have both received... 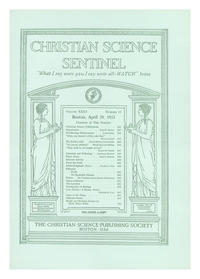