"Our eyes are upon thee"

One of the beautiful stories of deliverance in the Bible is narrated in the twentieth chapter of II Chronicles. It is related that when Jehoshaphat was told that a great multitude was coming against him, he prepared for defense by instantly turning to God in prayer. He began his prayer by enumerating before the congregation the wonderful proofs they had witnessed of God's power of deliverance, and concluded by addressing God thus: "We have no might against this great company that cometh against us; neither know we what to do: but our eyes are upon thee."

In our mental journey from matter to Spirit, occasions may arise where, under the stress of trying circumstances, we scarcely know what to do. At such times we have, like Jehoshaphat, the privilege of turning whole-heartedly to God and waiting trustingly upon Him with the unselfed prayer, "Our eyes are upon thee." When he made this declaration, the king must have realized that the only possible means of deliverance was through absolute reliance upon God. The answer to his prayer is recorded in God's promise voiced by Jahaziel, "Ye shall not need to fight in this battle: set yourselves, stand ye still, and see the salvation of the Lord with you." 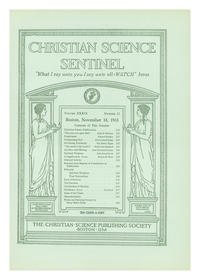