Over twenty-four years ago my attention was first called...

Over twenty-four years ago my attention was first called to Christian Science for the purpose of healing. I was suffering from tuberculosis in its last stage, and had been told that with the best of care I might live two months. In this condition I felt very indignant that anything should be suggested which was not recommended by physicians, as I had been told that there was nothing which could possibly help a person in my condition, and that the greatest care should be taken to prevent my wife and our small son from going the same way.

However, after talking it over, I decided to give Christian Science a chance, as there seemed nothing else to try. A practitioner was consulted, and the first treatment was given the following evening. That night when I retired I was still very skeptical, but I went to sleep, and awoke in the morning realizing that a great change had taken place. When I put my feet to the floor I stood erect and remarked that I was feeling fine and that my strength had returned. I dressed, ate my breakfast, went to the office, surprising everybody by my presence, and returned to active duty; and I have never had a sick day since. My healing was about as great a surprise to me as it was to those who knew me. Not only did I receive my strength, but the hemorrhages stopped, and my weight increased from ninety pounds to normal in a very short time.

Send a comment to the editors
NEXT IN THIS ISSUE
Testimony of Healing
It has been my experience that Christian Science treatment... 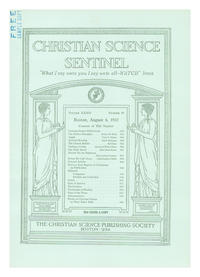