From Conservatism to Conviction

In several instances in "Science and Health with Key to the Scriptures" our revered Leader, Mary Baker Eddy, points to the detrimental side of conservatism. As is the case with many another ordinary term, conservatism, which is frequently lauded as a virtue, under the lens of spiritual analysis is seen to be often a misguided human trait, something to be aware of. It was a revelation to one student of Christian Science to find that conservatism may be inimical to progress, and a liability rather than an asset. On page 452 of Science and Health Mrs. Eddy has written, "We soil our garments with conservatism, and afterwards we must wash them clean."

Inasmuch as divine Love always guides the earnest seeker after the truth, a new line of thought was opened up. In the ensuing spiritual illumination on the value of conservatism, thought turned readily enough to the admonitory words, "How long halt ye between two opinions? if the Lord be God, follow him," which the prophet Elijah addressed to the children of Israel on Mount Carmel even before he proceeded, with a courage born of conviction, to prove to them beyond cavil that power belongs to God alone, and that this fact is demonstrated through spiritual understanding and confidence in God. The children of Israel had defiled themselves with idolatry and needed to be brought back to a pure faith in God. So, likewise, must the faltering, conservative thought be freed, cleansed from doubt and from timidity that seeks safety in holding back. Reliance must be rightly placed on a sure foundation. Material means, the almost exclusively used remedy for relief from human ills during the centuries, cannot constitute a dependable foundation. Even natural scientists, who have believed cause and effect to be in or of matter, have in more recent times admitted the illusory nature of matter. What, then, is there for mankind to turn to, except Spirit and spiritual truth? 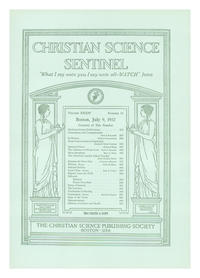