To a Christian Scientist that cheerful greeting, "Happy New Year," which it is customary to exchange on the first day of each year, is more than mere words. The religion of Christian Science, which is founded upon the infinite goodness of God, teaches its followers to expect a happy new year. Indeed, a Christian Scientist looks upon each new day, as well as every new year, as an occasion for the unfoldment of more of the goodness of God. The clearer one's sense of God as infinite good, the freer is his thought of fear or dread of the future; conversely, the freer one's thought is of fear, as the result of knowing God, the fuller of permanent happiness is his daily living.

When Jesus declared, "Verily, verily, I say unto you, Before Abraham was, I am," his hearers did not understand him. He was proclaiming the at-one-ment of his true self with the eternal good, and was separating himself from the false belief of time and the errors that follow in its train. He knew that man as the spiritual idea of Mind is as eternal as his creator. Because Jesus understood man as the reflection of God, having qualities which eternally express God, he could conquer sin, disease, death, and every form of discord. He knew the difference between man as God made him and the sinful, sick mortal miscalled man. 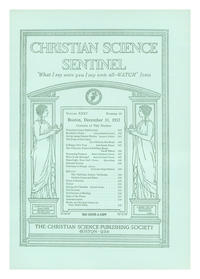