In the epistle to the Hebrews we read, "He that cometh to God must believe that he is, and that he is a rewarder of them that diligently seek him." To diligently seek God is to long for good only, and to strive for its establishment and manifestation even in the face of seeming ills. As this effort, this active desire, is individually practiced, it will gradually become universal, and this will mean the redemption of the world from beliefs in materiality and its attendant discords. We may not come to God with pride of mortal selfhood, coldness of intellect, or with any conceit in personal achievement. We come because we believe in Christ Jesus and his teachings as to the allness and goodness of God, the Father, because we realize something, at least, of what love means, as evidenced by him who "gave himself for us," that we might find the Christ-way of redemption from the deceptions of mortal existence.

When Jesus called to Lazarus to "come forth" from the belief in death, he admitted no reality in death. Jesus was ever conscious of Life, and so he could call to Lazarus to come out from the débris of fear and darkness into the light of eternal Truth. The form "bound hand and foot with grave-clothes" represented the mortal concept of man, subject to disease and death. The mortal sense of man is the Adam-dream of a creation in which God has no part. On page 75 of "Science and Health with Key to the Scriptures" Mrs. Eddy writes, "Jesus restored Lazarus by the understanding that Lazarus had never died, not by an admission that his body had died and then lived again." It was the call of Truth, and Lazarus was obedient to its message. Jesus also called to the blind to see and the lame to walk, ignoring the supposition that they could not do these perfectly natural things. He saw perfect man always; and to the true self he called, knowing that man's dominion and right activity are never interfered with. All mankind must surely come forth from the material suggestion that man is mortal, and rise to the clear vision of man as God's image. This man is spiritual, perfect, and immortal now. Every response to the call of Truth, with the resultant coming out of evil conditions, proves those very conditions to be nothingness, negation. Only that which is real and true exists. 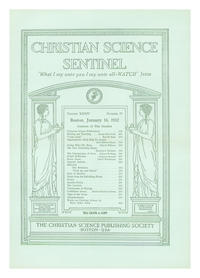