About eight years ago I was healed through Christian Science...

About eight years ago I was healed through Christian Science of a severe case of conjunctivitis, and was so much impressed thereby that I began to attend meetings in a church of that denomination. After going to these meetings for a year I expressed a desire to join the church, but was told that I must first leave off the use of tobacco, to which I had been addicted for thirty-eight years. I had tried many times to break this habit, usually on New Year's days, but would resume in a week or two, sorrowfully acknowledging to myself that tobacco had become my master. When told what must be done before I could join the church, I replied facetiously that I was going into this thing as one would take the "Keeley cure" for the liquor habit, meaning that I proposed to use all the tobacco I wanted as long as I wanted it, and leave the final result to divine Love, meanwhile promising myself that I would abide by the consequences.

After two weeks had passed, during which I had used far more of the weed than usual, I retired one night and read myself to sleep from one of Mrs. Eddy's books. I awoke after a night of dreamless slumber, and sleepily arising for the day's activities discovered that I was repeating over and over the words, "God is perfect and the real man reflects God." With each repetition there came to me, with steadily increasing clearness, such a vivid realization of the meaning of those words that my first impressions were those of mingled curiosity and alarm. This was followed by a joyful sense of the harmony implied by the words "purity" and "perfection," and an involuntary comparison between my life as I was living it and the exalted mental state I was then experiencing. Language fails to convey any adequate concept of the sense of purity that thrilled through me. For a moment I reveled in a marvelous realization of the truth contained in the words, "God is perfect." I remember that I vaguely questioned why this had happened, and as though in answer a quiet voice seemed to say, After this you can never use tobacco again; and from that moment I have had no desire to use tobacco.

Send a comment to the editors
NEXT IN THIS ISSUE
Testimony of Healing
"Longevity is increasing and the power of sin diminishing,... 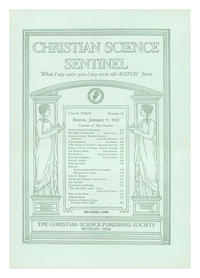