In a recent issue of your valued paper appeared an item...

Merrill M. Hutchinson, Committee on Publication for the State of Georgia,—Thomasville

In a recent issue of your valued paper appeared an item from London stating: "The lower house of the Canterbury convocation of the Church of England gave its approval to faith healing and asked that it be given the official sanction of the church. The vote on the resolution followed several speeches in which Christian Science was called fantastic as a religious faith, yet was highly praised as the greatest means of faith healing." This action unquestionably shows the trend of modern thought.

That your readers may the better judge for themselves, allow me to explain briefly why Christian Science is not fantastic, nor its healings accomplished by a blind faith. 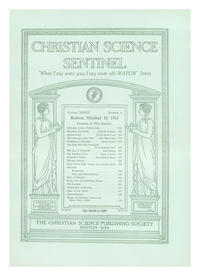