Referring to Paul's words to the Corinthians, "Now is the accepted time; behold, now is the day of salvation," Mrs. Eddy writes on page 39 of "Science and Health with Key to the Scriptures," "Now is the time for so-called material pains and material pleasures to pass away, for both are unreal, because impossible in Science." Salvation, then, may be regarded as deliverance from the bondage of material sense, that false sense which is responsible for all human misery.

Our Leader presents salvation in another light. In the Glossary of Science and Health (p. 593) she defines it as "Life, Truth, and Love understood and demonstrated as supreme over all; sin, sickness, and death destroyed." Here she indicates the scientific method of salvation, namely, the gaining of an understanding of Life, Truth, and Love, and the demonstration thereof. Here also she points out the result—the destruction of sin, sickness, and death; which is the same as deliverance from the bondage of material sense, since that triad of errors is the inevitable consequence of materiality. 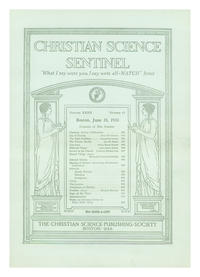