Those within the range of the sound of the chimes of The Mother Church appreciate the glad message and beautiful tone of these bells when they sound out well-known hymns from the Christian Science hymnal prior to the church services, or repeat the familiar Handel phrase especially written for bells, rung at stated hours by clock control. Few, however, know Mrs. Eddy's part in arranging for this music of the chimes, of which she was very fond. According to her desire, the tower of the original Mother Church in Boston was equipped with them. First Church of Christ, Scientist, at Concord, New Hampshire, whose edifice was a gift from Mrs. Eddy, likewise has a chime. Like that of the original Mother Church, it is comprised of tubular bells, fifteen in number, and rung by hand.

When The Mother Church Extension was built, it overtowered the smaller edifice, and a new chime was required. Bells of regular form and arranged to be rung from a manual operated by hand and foot were chosen. The Directors of The Mother Church asked Mrs. Eddy to name the inscription she would like cast on the major or tenor bell of the chime, which numbers in all eleven bells ranging in weight from four hundred pounds to two tons. She chose the following, and it appears as she designated: 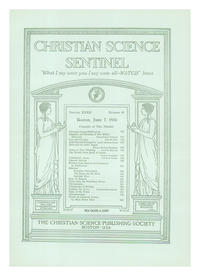