When Mary Baker Eddy christened her discovery of the Principle and rules governing man and the universe, she used the exact combination of words needed to characterize its universal meaning and mission. Christian Science is preeminently Christian because it follows faithfully the words and works of Christ Jesus. It is Science because it is demonstrable according to given rules. During the many centuries preceding Mrs. Eddy's discovery, men had classified various teachings as science, yet those of Jesus were not so understood. Mathematics, music, and astronomy were thus classified, and even the empirical practice of medicine was, and still is, so dignified. And yet the theme of themes, the one subject of transcendent importance, that which comprehends all that is worth while, and beside which all else is as nothing, was left entirely in the realm of human speculation! In the light of the revelation of Christian Science, one can only marvel at this inconsistency.

Even to-day there are many professed Christians who question the possibility of gaining an exact knowledge or understanding of God's eternal plan and of its present availability and potency to heal every discordant condition; and this in spite of the unequivocal statement of Jesus, as recorded in the eighth chapter of John's Gospel, "Ye shall know the truth, and the truth shall make you free." No limitation was placed on this promise, and no condition laid down except continuance in His word. It was therefore intended to indicate the right of all to attain a full salvation. To "know" anything means having true knowledge of that which is to be known; so to "know the truth" must mean to have an exact, demonstrable understanding of Truth, God, and of His spiritual creation, man. 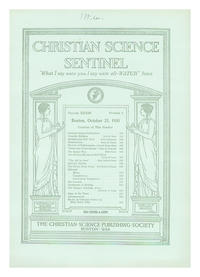