Perhaps no words of our Saviour, Christ Jesus, are more familiar than those of the Sermon on the Mount, especially the Beatitudes. These are known wherever the Bible is found. They have been used over and over again; yet they remain a well overflowing with the pure water of Life.

Let us look at the picture presented in the fourth and fifth chapters of the Gospel of Matthew. Our Master had commenced his divine ministry. His fame had spread to such a degree that great crowds followed him, and many were brought to him for healing, "and he healed them." Then he had a desire to go apart from the multitude, and "he went up into a mountain." Doubtless the Master sought quietude that he might turn in gratitude to the Father, as he often did, seeking to know His will. It was natural for him to do so; but in this case there may have been a special need, for we read, "And when he was set, his disciples came unto him: and he opened his mouth, and taught them." Then followed his gracious words, including the Beatitudes, giving abundant proof that he had been divinely prepared for the great work of teaching his disciples. 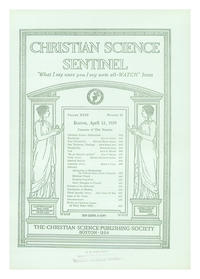