Paul showed how far he had advanced in the Christianity of Christ Jesus, showed how much of the spirit of true Christianity he had assimilated, when, quoting from the prophet Isaiah (52:7), he wrote to the church at Rome, "How beautiful are the feet of them that preach the gospel of peace, and bring glad tidings of good things!" Isaiah had written prophetically, having before his thought the Messiah who was to come. Paul wrote after Christ Jesus had completed his life-work, having overcome death and the grave and ascended. And at the birth of the Saviour, was not "a multitude of the heavenly host praising God" heard to say, "Glory to God in the highest, and on earth peace, good will toward men"?

It has always been that way with the highest prophetic thought: it has been conscious of the coming of good will and peace to dwell among men through the Christ, Truth, and has given the glory to God. The greatest of all the prophets, the Master himself, strove continuously during his ministry to bring comfort and peace to mankind. Did not every physical or mental healing he brought about in a measure do this? Did not every sin he forgave—healed—in a measure do this? Did not every exposure he made of the folly and hypocrisy of the carnal mind tend to do this? Jesus healed the sick and the sinning by the ideas of Truth he knew so well; and whenever it was necessary, he exposed the error to be destroyed, speaking the truth fearlessly, thus bringing to mortal thought "not peace, but a sword." On page 19 of "Science and Health with Key to the Scriptures" Mrs. Eddy writes, "The Master forbore not to speak the whole truth, declaring precisely what would destroy sickness, sin, and death, although his teaching set households at variance, and brought to material beliefs not peace, but a sword." 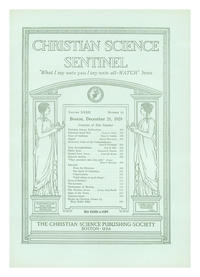