"Behold, what manner of love"

Throughout the world, in every Sunday service in Christian Science churches, the following words of John, the beloved disciple, are read: "Behold, what manner of love the Father hath bestowed upon us, that we should be called the sons of God." Could we but listen to this statement on each occasion as though we were hearing it for the first time, what a wonderful perception we might gain of the allness of divine Love! The infinite love of God has always existed and is ever available to all. It is only the mist of materialism which appears to shut out the realization of it.

In every age, however, there have been those who were able in a measure to perceive this great fact and, consequently, to rise higher in spiritual consciousness. Thus we read of Abraham's beholding, perhaps faintly, "what manner of love the Father hath bestowed upon us," and feeling impelled to seek a higher sense of existence. As he progressed, a truer understanding of Love was unfolded to him, until ultimately he was accepted as the father of those who worshiped the one God. Did not the Saviour, Christ Jesus, refer to a woman he had healed as "being a daughter of Abraham"? From a merely human point of view, Abraham stands as a great patriarch, one especially endowed spiritually; but that view reduces him to the position of an honourable historical character, without acknowledgment of the omnipotent Love which brought about his exaltation; and it deprives him of his rightful place in religious history. Of Abraham, however, our revered Leader, Mary Baker Eddy, says in "Science and Health with Key to the Scriptures" (p.579), "This patriarch illustrated the purpose of Love to create trust in good, and showed the life-preserving power of spiritual understanding."

Send a comment to the editors
NEXT IN THIS ISSUE
Article
The alleged quotation from Mary Baker Eddy against... 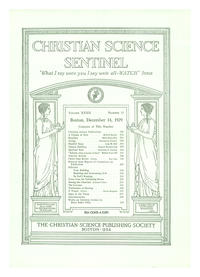