To students of Christian Science there is comfort, encouragement, and instruction in the story of Peter's imprisonment and deliverance, as told in the twelfth chapter of the Acts of the Apostles.

Peter had been going about glorifying God in his daily conduct and conversation, testifying to His love and guidance. "Herod the king stretched forth his hands to vex certain of the church," and having killed James the brother of John and seeing that it pleased the Jews, he took Peter also and put him in prison, intending to bring him forth after Easter, possibly to a like fate, according to the will of the people. In the prison, Peter was bound with chains, between two soldiers; and in addition there were other keepers before the door. Is it not in like manner that, mentally speaking, evil seeks to bind one with the chains of erroneous suggestions, even when one may be striving to live up to his highest concept of discipleship? Apparently harmless suggestions, not being recognized as erroneous, are entertained in consciousness and bear fruit that is not good, casting into a prison of sin, of disease, or of confused thinking the one who has accepted them. Then the keepers of the prison—the many and varied fears that assail—keep watch before the prison door.

Send a comment to the editors
NEXT IN THIS ISSUE
Article
Look Up! 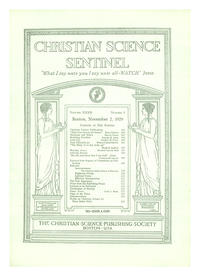