Over fourteen years ago an uncle was healed of appendicitis,...

Over fourteen years ago an uncle was healed of appendicitis, this being the first I heard of Christian Science healing. I was quite young at the time, but have never forgotten how he was carried away to the hospital for the operation but came home without having had it. About eight or ten years later I decided to try Christian Science as I had always been a victim of asthma and insomnia. I could not go to sleep before dawn, and when I had asthma would have to sit up all night. Then I began to have heart trouble and lost a great deal of weight. Finally a doctor told my family that I would have to go to a certain lake and stay there six months or a year; if not, I would go into consumption.

I rejoice to say that every one of these errors has been overcome through Christian Science. I was healed of asthma long before I realized that I had been healed. Insomnia was also overcome within the first two weeks. The heart trouble was a little more stubborn, but that also yielded. I may say I was so filled with fear that I went to the lake, but after staying there a few weeks I wrote to the Christian Science practitioner and told her how I wished I could come home; and she wrote and told me to come, as God is everywhere and I had nothing to fear. The thought came very clearly to me then that I could find my God and healing in any place, just as well as at the lake, and even sooner, as I would be trusting in God instead of the air there to heal me. Instead of going into consumption I have gained in weight, happiness, and health, and have given up all the medicines I was taking at the time. When I left the lake I dropped all medicine and took my stand for Christian Science. 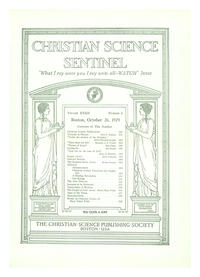